This cool little device is a car/home mount for holsters. What that means practically is you can take this put some screws through the eyelets and attach the plate virtually anywhere and then you've got a nice secure platform to slide the clip from the holster into and it then allows that holster to be temporarily mounted there. You can still draw the firearm from the holster, and it's quick and easy to remove the holster from the mount while still being very secure.

This mount should be compatible with most kydex holsters on the market using a polymer clip of the same style as mine, however I can't guarantee compatibility beyond my own gear. If you want to use one for someone else's gear please feel free to contact me and I can give you some more guidance.

Application wise, there are a ton of things you can do with this little mount. Attach it to your workbench in your shop, the side of the center console in the car and just about anywhere you don't mind running some screws into to mount it. I will say it's up to you to decide where to mount it and the type of hardware you use. If mounting in the car or anywhere make certain there are no hidden wires etc behind the panel you are screwing it to. And you can even get several and use them in multiple places as needed.

Another perk to this device is that it doesn't look like a holster or a gun for that matter. So if you leave it open in the car it will not draw any attention to the fact that you could be carrying a firearm.

NOTE: Kydex is a thermo molded plastic, it will deform under high temp conditions. If you mount one of these in your car in a southern environment where it gets very hot it could deform. However I can't say for sure since it depends on the specific case and situation. Now people in those climates are probably more aware of this compared to those of us where snow exists half the year;) But I wanted to mention it anyhow, since when we were in Texas I saw crazy things that had issues with the temps that existed within cars during the warmer months.

Credit: The concept of this type of device Tony from Alameda Holsters came up with another guy(who's name I don't know). But that's where the idea came from I just changed some things on the mold and made it my own to a degree and I'm sure more changes will come over time. 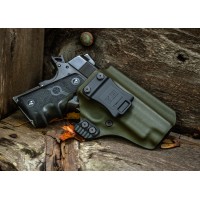 The Edict holster is an evolution of appendix carry holsters, bringing comfort as well as excellent .. 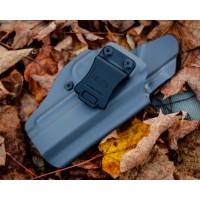 The Sweep Inside the Waistband(IWB) is designed to be carried strong side on the hip between 3-5 o'c.. 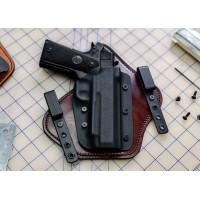 The Kymera Hybrid is a concept that has been long in the making. The origin of Kymera was the word C..